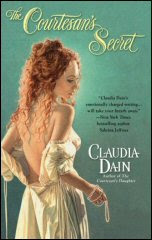 Genre: Historical Romance
Spoiler free description: After seeing Sophia's success at arranging Caroline's marriage (The Courtesan's Daughter), Louisa plucks up her courage and approaches Sophia to ask for help getting her pearls back, as well as finally attracting the attention of Dutton. Louisa has been chasing Dutton for TWO years. He's been ignoring her just as long. Well, all she had to do was ask, and Sophia's on the case. But Sophia sees clearly that Dutton has no time for Louisa, and Blakesly has been chasing after Louisa for just as long as she's been chasing Dutton. Let the games begin.
One note to keep in mind, this story centers just as much on Sophia as on the HEA couple. There also appears to be an ongoing story arc with Anne Warren, which I'm really enjoying.
The best: I still say witty dialog. Nice double entendre. Layers and layers to the story! I love Sophia's brother and nephews. The scene where Blakesly gets permission to marry Louisa from her father... I think it will be an all time favorite of mine!
The worst: Louisa is pretty stupid and self absorbed. Too wrapped up in herself to appreciate what's goign on and read any road signs by herself. That got to be quite annoying.
Grade B
Posted by C at 11:23 AM

I often find myself turning back to favorite books, and sometimes trying to remember what they were. I thought I'd keep a list of what I'm reading for a while, posting reviews when I feel like it. Enjoy!